Almost every day, we are reminded to be thankful for all that we have, because there are people who are worse off than we are; even though we may not have everything we ever wanted we are told to be satisfied, because ‘at least we have our health’.

But is that enough? Is it not more important to have fire in our veins? To have a dream that drives us beyond the limitations of our bodies?

Huang Guofu has no arms. He lost them as a child in a terrible accident, but decades later, we know who he is, we respect him as an artist and as a man. His art is not admired simply because he creates it without the use of his arms. Huang Guofu is a true artist, he is talented, his work speaks to people, and he inspires others to hope for better.

That is what art is meant to do; evoke feelings and inspire hope.

Huang Guofu can paint with his feet and with his mouth; and his skill is considerable both ways. He started painting before he was a teenager and speaks of how at first his paintings looked nothing like he wanted them to; but with time and practice, his work improved.
Now, vice-curator of Chongqing Talents Museum and happily married for many years, Huang Guofu has yet to slow down. Since his fearless arrival on the art scene, many other artists who also use their feet and mouth have found the courage to be in the public eye and have joined the museum.

Huang Guofu lost his arms when he was a very small child, many of us can hear of an accident like that and immediately our minds will think of all the many jobs and activities that are no longer an option, and we would focus on the loss, and mourn that which is gone.

Huang Guofu chose to focus on what he has. He knew that painting was what he was meant to do, and he found a way to do it.
He gives us the courage to strive for what we dream of; because his example shows us that adversity can only stop you if you let it. 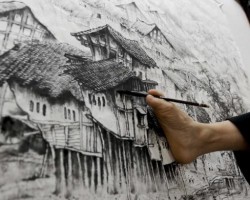